From 5 to 9 May, the European Bodybuilding & Fitness Championships were organized in Santa Susanna, Spain. The Netherlands was represented in the Wellness, Bikini fitness and Body fitness classes. Under the watchful eye of President Juliette Bergmann, who was at the Pavelló poliesportiu from early in the morning until late at night encouraging the athletes, no fewer than three medals were won.

Despite the relatively small number of athletes, the Dutch team did very well and took twelfth place in the national competition (out of 28). Ellen Breemans came in fourth in the Body fitness category over 168 cm. Jeanette Solli won two medals, a bronze in the wellness category up to 163 cm, and a silver in the open class Junior wellness 21-23 years. Yana Pomozybida won gold in the Bikini Fitness up to 162 cm.

Furthermore, the NBBF has a new international jury member, national coach Ingrid Stewart! To top it all off, at the previous congress, President Juliette Bergmann was honored by IFBB President Rafael Santonja with a very prestigious IFBB honorary lifetime vice president title!

Ingrid Stewart attended for the first time as a member of the officials delegation and adds: “This was the first time that I went along as a member of the women’s committee. I hope I was able to help the girls well. We stayed in the athletes’ hotel assigned to us and were fully equipped. As icing on the cake, I also obtained my qualification as an international judge. As for the athletes, they all did their best and showed their best shape on the podium. The entire level of the European Championship was extremely high. On to the next game and hopefully with a team of gentlemen too!”

If it doesn’t kill me, it makes me stronger

The title of this piece did not literally come out of Fitness Bikini athlete Yana, but it did come to mind immediately after I hung up the phone after a short interview. If, like me, you have been involved in sports for over 40 years, you know that almost everyone experiences his or her preparation as terribly difficult, but when you see what Yana experienced in a short time while she still achieved incredible sports performances, you can’t help but take most people who had it “so hard” with a grain of salt.

Yana comes from Ukraine and then you immediately understand that she is currently having a hard time. Her country is being bombed by the Russian army, many family members are in mortal danger and how that war will develop is still a question mark for everyone.

But this misery isn’t the only thing that has happened to Yana over the past few years, the years when she was performing so incredibly! Yana graduated from the medical university in western Ukraine and came to the Netherlands four and a half years ago to explore the possibilities here. Her mother already lived and worked in the Netherlands. Finding work in the medical sector was of course difficult due to, among other things, the language barrier, which is why Yana threw her heart and soul into sports. “I noticed that the Dutch are a fit people. Everyone cycles here all year round, something that was not possible in Ukraine because of the long harsh winters. I was already sporty, I danced a lot and I was a choreographer and I could also sometimes be found at the gym. But it was only here in the Netherlands that I started to approach the latter more professionally.”

Yana just lived here and had to go back to Ukraine to get the necessary paperwork in order. She decided to enter a beginners competition and, to her own surprise, reached the final. Yana immediately had a taste for it and once back in Amsterdam she wanted to participate in a contest again. She found a trainer to help her (Steven from Beyond Fitness) and together they chose the 2019 JBC as their first goal. Yana won her class and also became overall winner bikini fitness! She persevered and registered for the Open Rotterdam, a contest at B-level. During the preparation, disaster struck. Yana’s stepfather crashed in a helicopter and she was plunged into deep mourning. Despite this misery, Yana won her class again and yes, again the overall!

She advanced to the highest national level and competed in the N.K. As if it were the most natural thing in the world, Yana won her class again and yes, the overall. Yana took the goblet home and had an image of a helicopter engraved on it. She dedicated the victory to her stepfather Jordan, something that means a lot to her. Training was put on a slightly lower plan, Yana had a lot to process and just when she wanted to pick it up again, the world was flooded by the corona crisis and training became almost impossible for Yana. Nevertheless, she took part in the Arnold Classic Europe in Spain where she finished fourth! “However, I was not in optimal shape. I especially lost mass on my upper body,” she says.

Slowly, the situation around covid improved and training went a bit better, until disaster struck again. In October, Yana’s husband collapsed in the middle of the street from a heart attack! Yana’s medical background came in very handy here and she managed to save his life through intervention. Fortunately, the father of her two bonus children and her main support and rock survived and has since recovered well. And then…yes, then the Russian army invaded her homeland! “It was like being in a bad movie,” Yana explains. “But the passion for the sport did not die, I kept my faith and knew that I would come out stronger in the end. I went to the European Championship anyway and became first in my class,” said the 1.62m tall athlete. 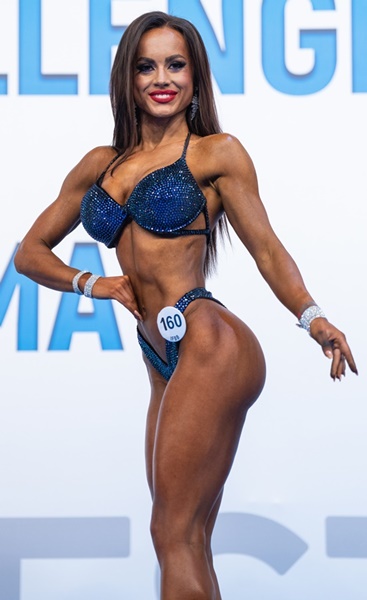 “After this E.C. we looked at the competition calendar again. A contest in the Czech Republic came too early and there we saw mention of the Arnold Classic in South Africa. My husband said in a spontaneous mood, “That’s where we’re going!” It turned out to be a great experience. It was beautiful. Due to the covid, the organization had set up tents everywhere. It wasn’t as busy as the AC Europe, the background was magical and I met so many nice people.” Yana won her class again and the organization invited her to join the professionals afterwards and Yana did that again with success because a fourth place in a first professional appearance is of course unbelievably good.

I did this interview on June 15th and Yana told me that she will participate again this weekend in Luxembourg at the Diamond Cup. Still with the amateurs, because she will not participate in the pro circuit until 2023. “I need more mass to be successful with the professionals,” explains Yana. Yana is currently coached by Oksana Brygidir, a Ukrainian IFBB pro-elite athlete with a huge track record. Yana currently works as a personal trainer in Amsterdam. “I am very worried about the situation in Ukraine and if there are bombings like a few days ago again on the place where I come from, I will not be able to train properly.” Well, I understand that all too well and when I finished the conversation I just thought, wow, what some people have to go through. But it seems that Yana is only getting stronger!